Art on The Tide

A new, riverside linear park on Greenwich Peninsula wouldn't be complete without some great new works of art. Look out for giant mermaids, serpents, a sculpted red head and more.

Hirst, one of the world’s most successful artists, used to live on the Peninsula; he rented a cottage near the Pilot pub shortly after moving to London and made his first medicine cabinet there. His seminal 1988 group exhibition, Freeze, was staged a little to the west, in Surrey Docks.

These works, however, have their own, slightly less reliable back story. Hirst created the mythical, nautical sculptures for his Treasures from the Wreck of the Unbelievable exhibition, which was staged in Venice 9 April-3 December 2017. The show told the story of an ancient shipwreck, the Unbelievable (Apistos in the original Koine Greek), presenting the works as its salvaged cargo.

The first two sculptures to be installed from this exhibition are Hydra & Kali – a 17-foot-high sculpture depicting the Hindu goddess fighting a huge, many-headed serpent – and Mermaid – a bronze of a more familiar mythical figure. And if you like these two watery additions to the Peninsula, check back over the coming months; a total of eight works from Hirst’s 2017 show will be installed here soon.

Head In The Wind

The 81-year-old British artist is best-known for his highly sexualised pop-art sculptures, which have been admired by fellow creatives such as the US director Stanley Kubrick, the Japanese designer Issey Miyake, and the Beatles.

This more recent work, however, is a site-specific work, commissioned for and inspired by The Tide. Visitors and residents alike are invited to both observe and interact with the vibrant, painted-steel piece from above and below for a different perspective on this huge artwork.

Head in the Wind by Allen Jones

Longstanding visitors to the Peninsula might recognise this London-based artist’s work. Morag’s Studio Myerscough created the Colourblock Cranes, used to frame the construction of the Upper Riverside neighbourhood. Now Morag and her team have turned their attention to The Tide’s arches on either side of the walkway, bringing warmth and illumination through her signature super graphics.

Morag’s Studio Myerscough created the Colourblock Cranes, that used to frame the construction of the Upper Riverside neighbourhood.

Heather Peak and Ivan Morison of Studio Morison charmed Peninsula visitors and residents back in the spring with their NOW Gallery show, The Mouse and his Child, which was inspired by the cult children’s book of the same name. The studio’s whimsical, artisanal, all-inclusive fun continues, with the installation of a 27m long picnic table, which will sit along the riverside. 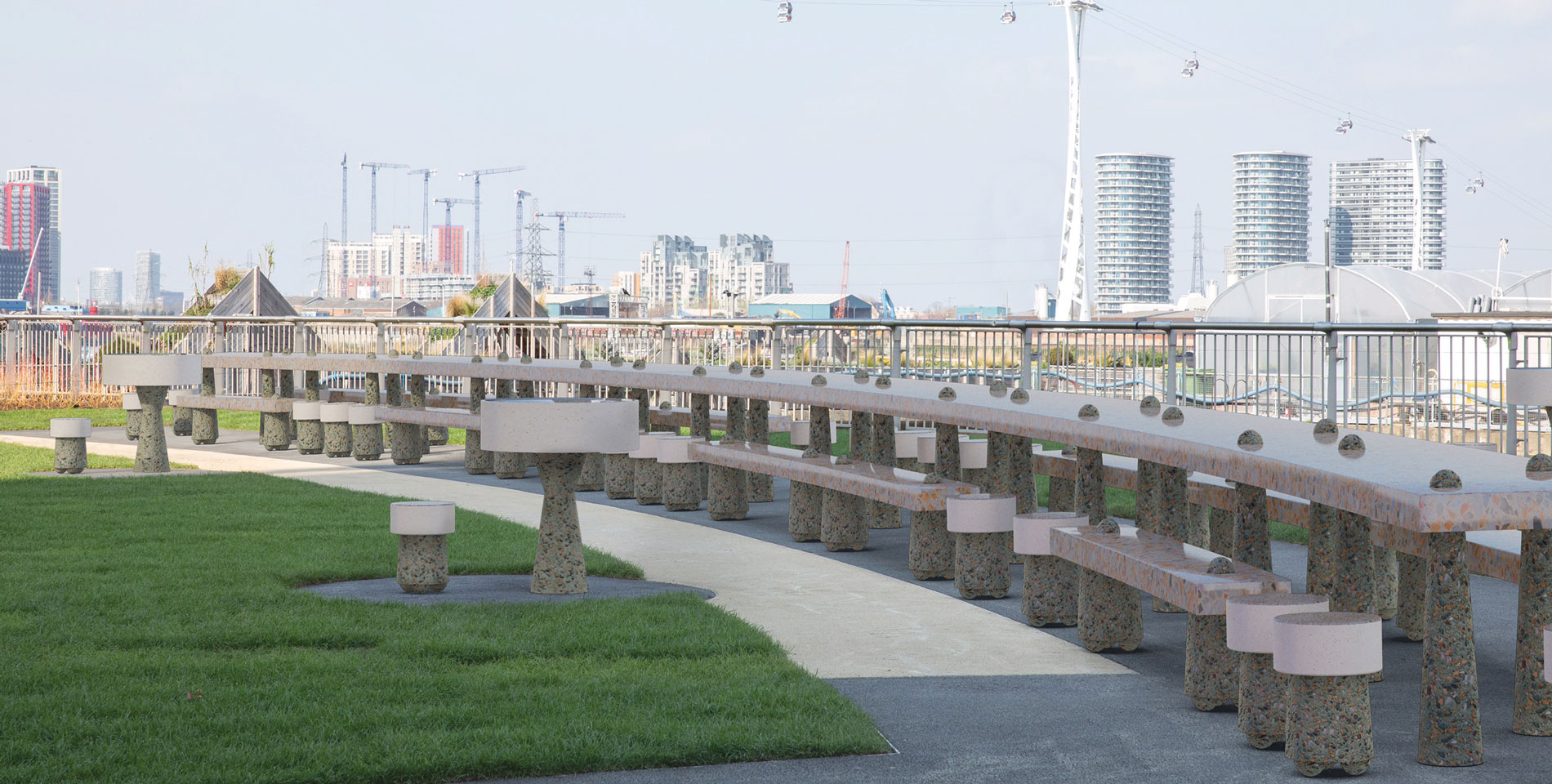