Damien Hirst on The Tide

Damien Hirst is one of Greenwich Peninsula’s most famous former residents. Shortly after arriving in London, back in the late 1980s, he lived on River Way, close to the Pilot pub. Back then, Hirst had yet to make a name for himself, and the Peninsula was home to condemned industrial works, fit for little more than the occasional film set or music video shoot. Yet the nascent artist still found plenty to admire in the city and the river.

Returning a little over three decades later to install works from his 2017 Venice exhibition, Treasures from the Wreck of the Unbelievable, he tells us how surprised he was to still recognise the place, and how pleased to discover his underwater works have found their way to the banks of the Thames.

Hi Damien. So tell us about when you lived on the Peninsula.

It was just before I went to Goldsmiths, so it must have been 1987-88. And it was at 80 River Way, near where the Pilot pub is. It’s so weird, because when I came down to look at the site of the sculptures, I totally assumed it had all been knocked down, but actually it’s the only thing left. I was really shocked.

It was in the middle of a gasworks; there was poisoned land everywhere, and there was just this one street. They used to film a lot of movies in the gasworks in the area; I think Kubrick made Full Metal Jacket there, and Mick Jagger and David Bowie did their Dancing in the Street video, too. Sometimes we’d go over there and hang out on a set in the middle of this wasteland. It was quite surreal; I remember all these palm trees being there at one point. It was constantly changing.

What did enjoy about the area?

At the end of the night, I’d sit by the river and look at all the rusted cranes. I’d collect things that were washed up on the riverbank, too; old bottles and bits of plastic, which I’d make into collages. That process later influenced my series, Treasures from the Wreck of the Unbelievable, which is where the Peninsula’s artworks come from.

At the end of the night, I’d sit by the river and look at all the rusted cranes. I’d collect things that were washed up on the riverbank, too; old bottles and bits of plastic, which I’d make into collages.

Damien Hirst on his memories of the Peninsula 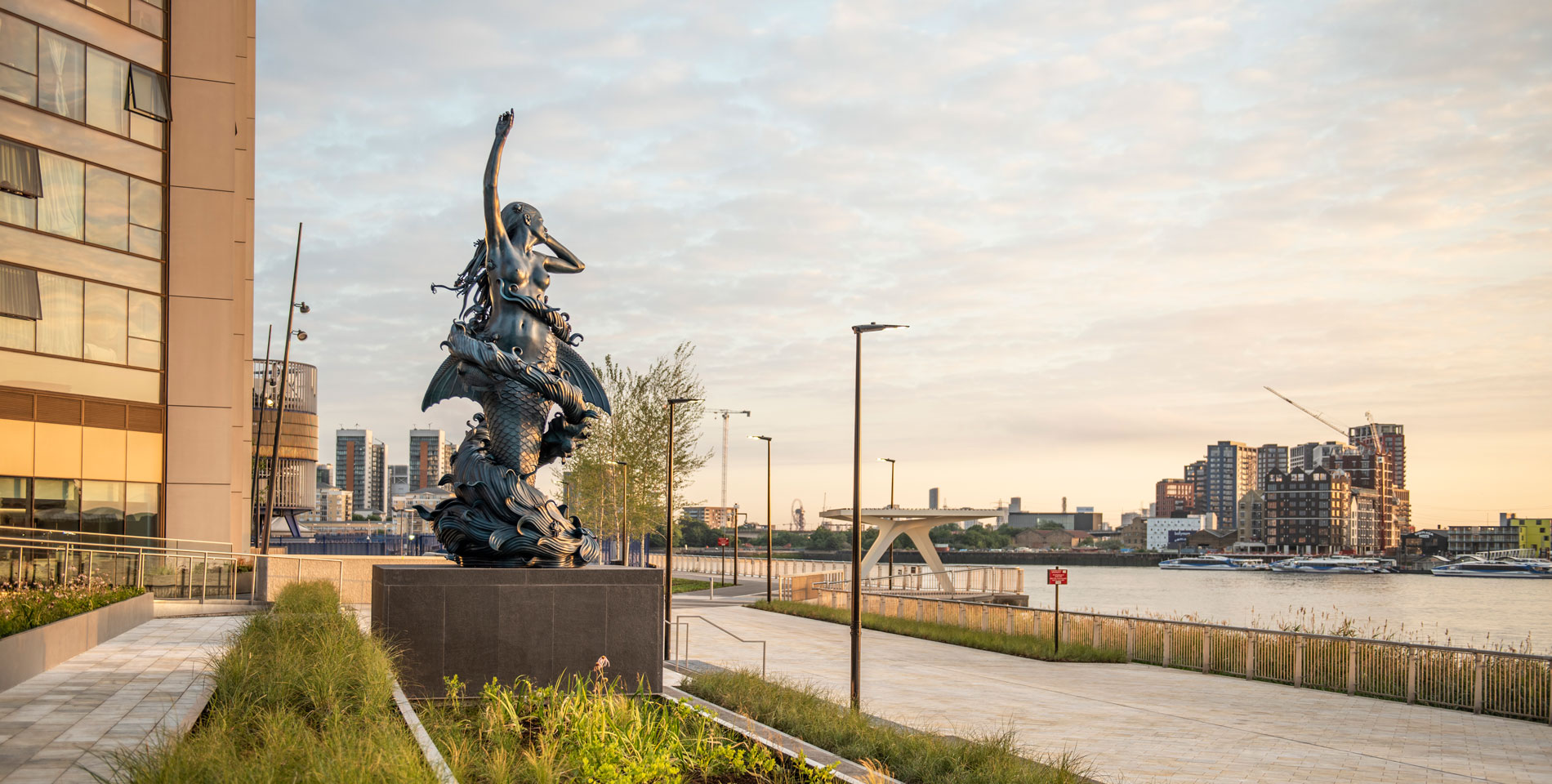 Could you tell us a bit about the first pieces to be installed on the Peninsula: Mermaid, Hydra and Kali?

For the Mermaid, I imagined the collector had fallen in love with a woman and commissioned a sculpture of her. Under one of the sculpture’s waves is a blue-ringed octopus, one of the most poisonous animals in the sea. There’s also a parrot fish, and crabs in her hair. I added in some contemporary references, such as [Japanese visual artist Takashi] Murakami’s Cowboy. The great thing about Treasures was you could reference all these contemporary things, but it was an ancient artwork, so you predated them. You could take anything from anywhere, and instead of stealing from them, they stole it from this ancient work, here! I wanted to play with ideas of authenticity.

I think the Mermaid represents the gullibility of the collector. He was gullible in his ideas, in his tastes. The whole idea that the collection disappeared without a trace, and all his treasures were lost, his dream was futile – it speaks to everyone’s successes and failures. Maybe the Mermaid sums that up more than the other works.

How about Hydra and Kali?

That’s a battle between the sexes, male and female, swords against serpents, but it was also about the ravages of time, the war of time as well. The snakes are based on a depiction of Hydra in a painting by Gustave Moreau. Kali is a bit mixed up; some parts come from the old Jason and the Argonauts movie, even though Kali is Hindu. There’s also some similarities with the Greek Hecate. That’s what’s great, being able to take inspiration from different cultures.

Do you think anyone believes that Treasures from the Wreck of the Unbelievable is real?

How do you feel about Treasures coming to the Greenwich Peninsula?

Oh, I’m really pleased. I started work on the sculptures before I had a place to show them. Then I eventually displayed them in Venice, and that was amazing, to have that association with the water. I think all the works are at home beside water; it’s so nice that that carries on.

I think all the works are at home beside water; it’s so nice that that carries on.

Damien Hirst on his works returning to Greenwich Peninsula 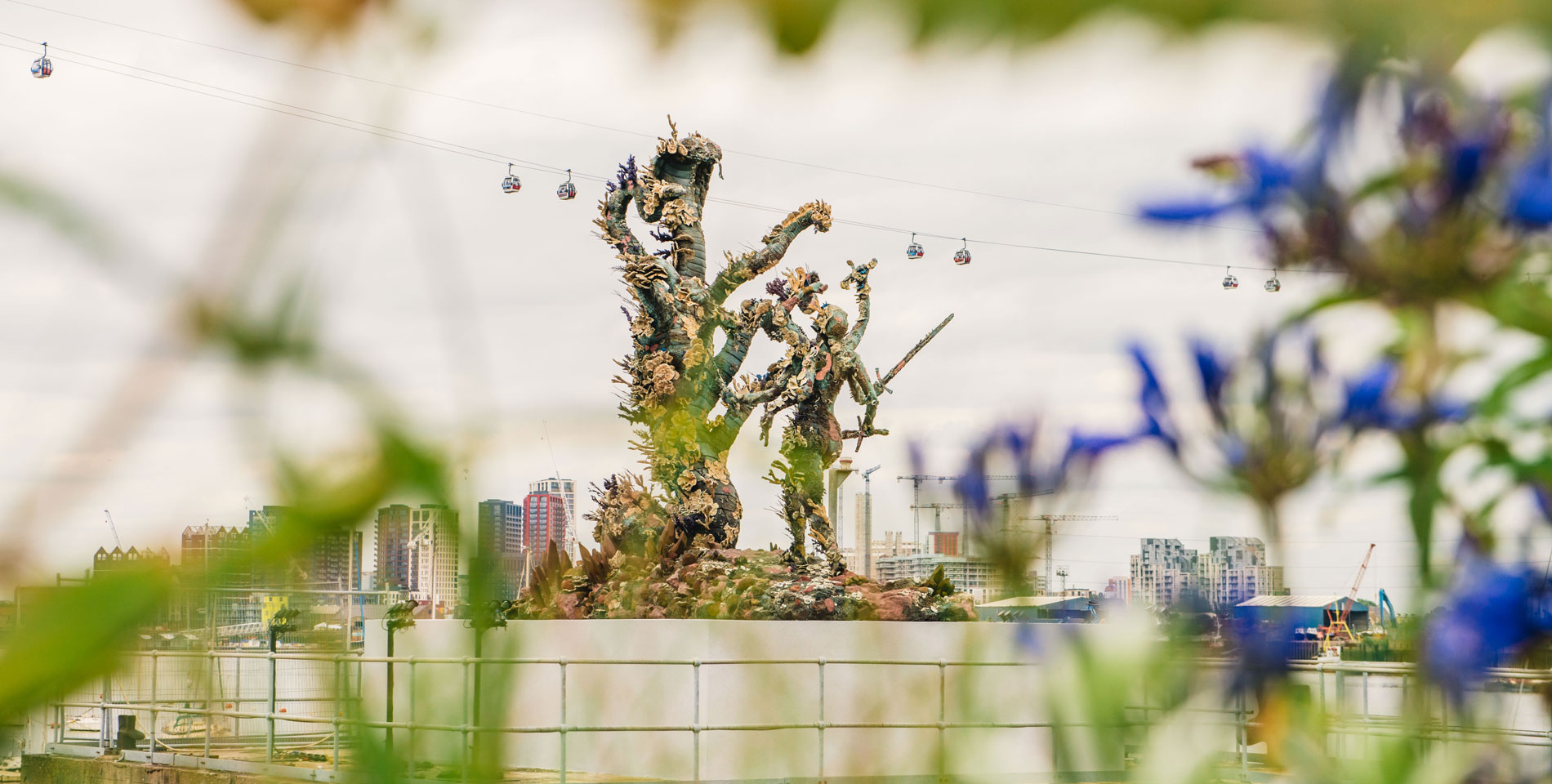