From a distance, NOW Gallery on Greenwich Peninsula currently appears to be housing a softly luminous, technicolour cloud. If you walk in a circle around the spherical glass building, the depth and shape of the object changes with your movement. The spring sun highlights certain shades and textures, while the size and intricacy of the multi-layered object adapts and reconfigures with your trajectory.

This glorious, supersized, rainbow-coloured piece of work is Slices of Time, the first large-scale installation in the UK by the French artist and architect Emmanuelle Moureaux. Born in 1971, her work has appeared worldwide from Brussels to Dubai as part of her 100 Colors series, where the full spectrum is recreated and deconstructed in different ways and materials depending on where it is sited. “It’s an installation which will present the flowing of time,” she explains of its latest iteration as we meet at the gallery shortly before the opening night of the exhibition. “I was inspired by the location, which is very close to the Greenwich Meridian, marking time, and also by the name of the gallery. So I decided to create an installation which worked in relation with time and represents the past, now and the future.”

The artwork’s visual representation of time becomes apparent as you study it more closely. In a sort of reverse impressionism, the closer you get to the work, the more it resolves, shifting from a blur of tones and shades to a delicately arranged sequence of thousands of small, sequential paper numbers hanging in mid-air. “There are 168,000 of them, a huge number. They are in 120 layers, like slices, with one layer representing one year. The first 20 layers are white and represent the past, from 2000 to 2019,” she explains. “The past is represented in white, and where you have a space between the white and the colours, that is now the present. You can stand and walk in there in the present time. And when you look to the other side the installation starts with yellow and then a gradation in 100 colours and this expresses the future 100 years.”

Moureaux has worked with numbers before (in the 2017 Forest of Numbers installation at the National Art Centre in Tokyo), but never at this scale or with this level of intricacy. As she talks, you also get a sense of how her artistic endeavours are informed by the rigorous architectural work that makes up the other half of her practice. “I love numbers, I love mathematics. And I think that with everything in our daily life, always we are surrounded by numbers. But when you create numbers in all these colours they are totally different – it’s magical.”

I was inspired by the location, which is very close to the Greenwich Meridian, marking time, and also by the name of the gallery. So I decided to create an installation which worked in relation with time and represents the past, now and the future

Emmanuelle Moureaux on her inspiration for NOW Gallery's 'Slices of Time' 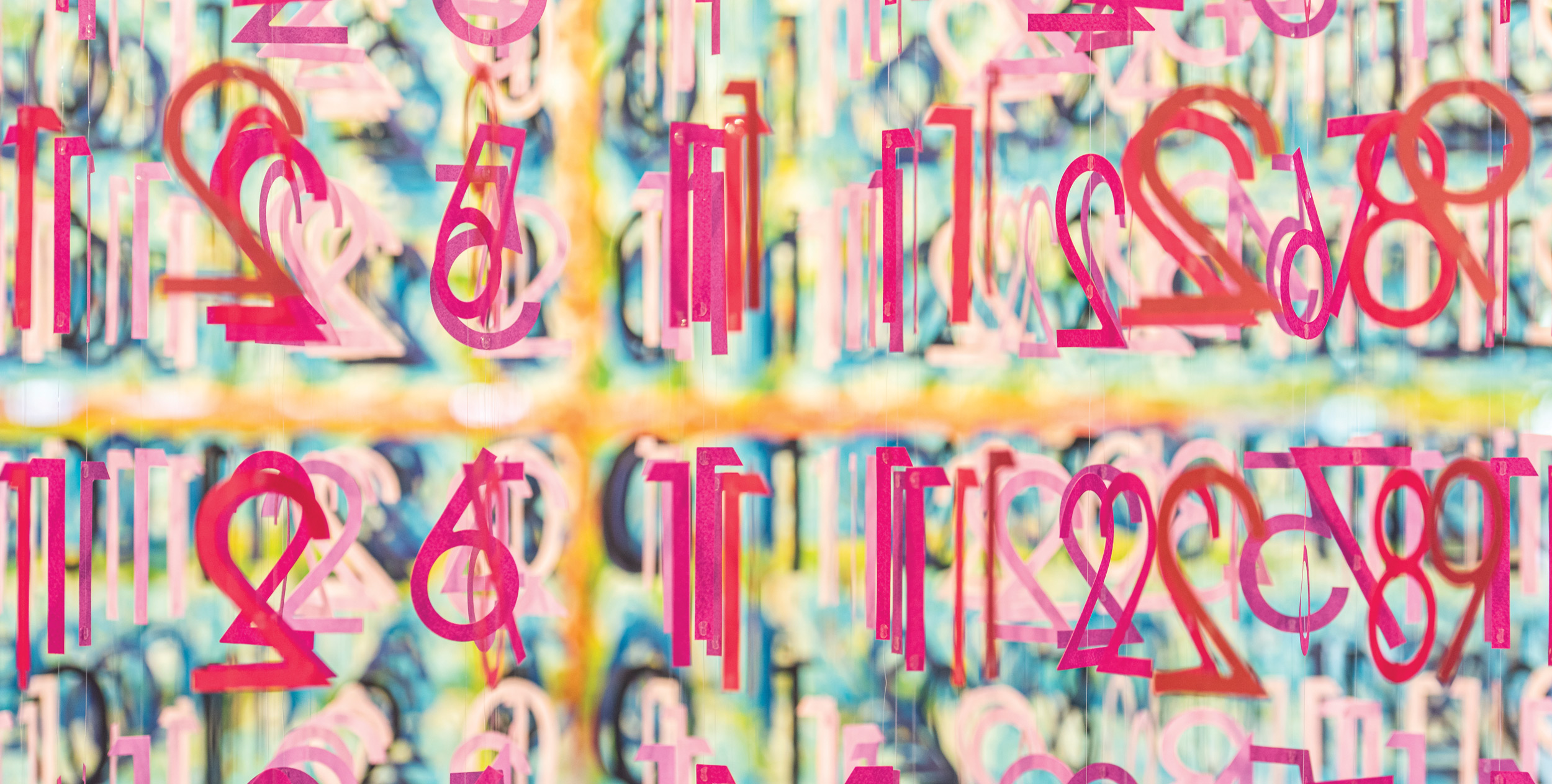 When we meet, a painstaking two-week installation process is drawing to a close, but a huge amount of preparation work has already taken place back in Japan where all of the numerical pieces are machine-cut by Moureaux’s regular fabricators, a process that takes two months. “It’s always the same construction team who I work with. The factories will cut the shapes, and it takes a lot of time. It’s a huge piece of work … I cannot do this if it’s only me, it really is the collaboration and cooperation of a lot of people who make it possible.” The paper responds beautifully to the changing light of the day, the size and scale of the work counterbalanced by the featherweight material. “The reasons for using paper are the colours – they are beautiful – but also the texture. I use several different types, but mostly I love that although it’s very difficult to produce, it is very simple. That’s important for me – to create something like this. I don’t like digital artworks, I’m not interested. I prefer the essence of pure materials.”

This rigorous focus on detail and tactility is just one of the ways in which the influence of Japan and its traditional aesthetic loom large in Moureaux’s work. She first visited the country in 1995, experiencing an instantaneous reaction to the city and the way that colour functioned in its landscape. “I felt it was so beautiful. A lot of colours, they appeared to me like they were floating in the city. I felt a lot of emotion. I was not conscious of colours before going to Tokyo – it was as if I saw them for the first time, and I decided to live in Tokyo at this moment. I went back to France to get my architect’s licence, and one month and a half later I moved to Tokyo to live and work. And when I created my studio several years later, I decided to create designs using colour in order to give the emotions to people that I felt myself.”

Moureaux has unified this Japanese aesthetic under her concept of shikiri, which reoccurs throughout her work. “It’s a Japanese word which means a screen or partition. Usually in architecture, colour is considered a minor element – it is the thing decided at the end of the design process. But I saw that colour is more important, and that colour can create space – that’s why I decided to use colours like a three-dimensional element to create the space itself.” The term itself is a kind of word game: “I changed one Japanese character so it refers to colours. It has the same pronunciation as ‘screen’, but Japanese people would see it and understand that it also means creating space using colours.”

As Moureaux returns to put the finishing touches to Slices of Time, I ask her if all of her audiences worldwide react in the same way to the art she creates. “I want people to feel something, to be moved. It can be a different emotion depending on the people – it can make them smile, to talk, to get power and energy. I work in a lot of countries, but usually when one person enters the space where my installation is, the reaction is that they smile naturally. That’s very nice for me. Of course there are some local changes – when I made this in Buenos Aires people danced when they saw the colour. But really, colour is universal – and it can make people happy.”

It’s a Japanese word which means a screen or partition. Usually in architecture, colour is considered a minor element – it is the thing decided at the end of the design process. But I saw that colour is more important, and that colour can create space – that’s why I decided to use colours like a three-dimensional element to create the space itself 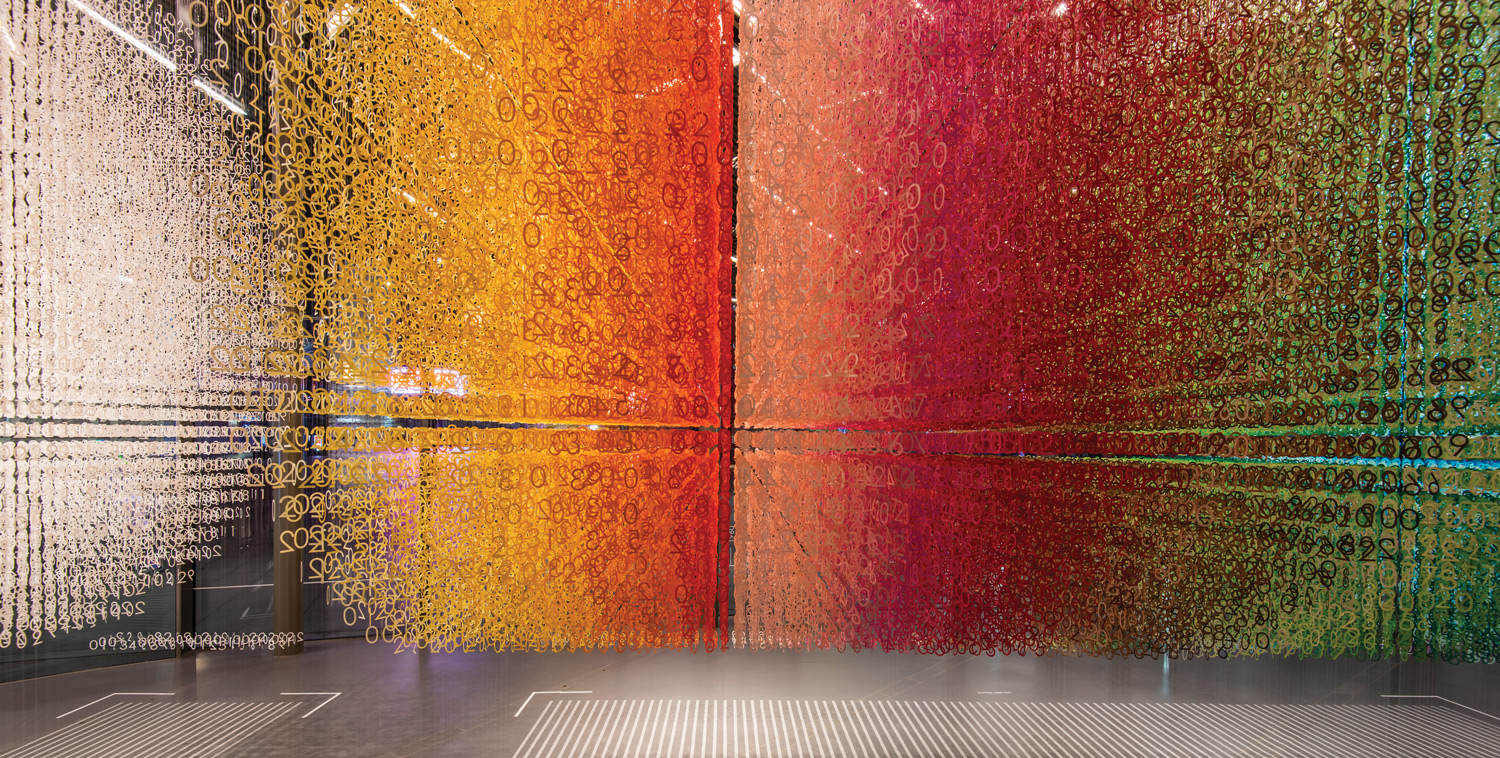