Alex Chinneck, the British sculptor, has just rolled in from Cambridge following a five-hour meeting with Smith and Woolwark, a structural engineering practice.

“I’m brain dead,” he laughs. Thirty-year-old Chinneck, who creates site-specific, fantastical installations, was out of town discussing his next trick, a 35-metre tall latticed steel replica of an electricity pylon. “There was a lot to do in not a lot of time. It’s an extremely complicated structure. There was a lot of people involved, so it was more about logistics and schedule then anything else.”

The work was commissioned by the London Design Festival as part of its Landmarks Project series, along with Knight Dragon, the Hong Kong property developer responsible for the ever-evolving development in the district. Conceived from 1186 meters of steel, the sculpture is a structural feat, tethered at a perilous angle and piercing the ground of the Greenwich Peninsula with its tip. Gnomically titled A Bullet from a Shooting Star, the work will be illuminated, making it visible from the passing Thames Clippers fleet and aircraft en route to London City Airport—for the Peninsula, it’s both a cultural and visual beacon.

MY WORK BEGAN TO SLOWLY EVOLVE IN AMBITION, SCALE AND COMPLEXITY 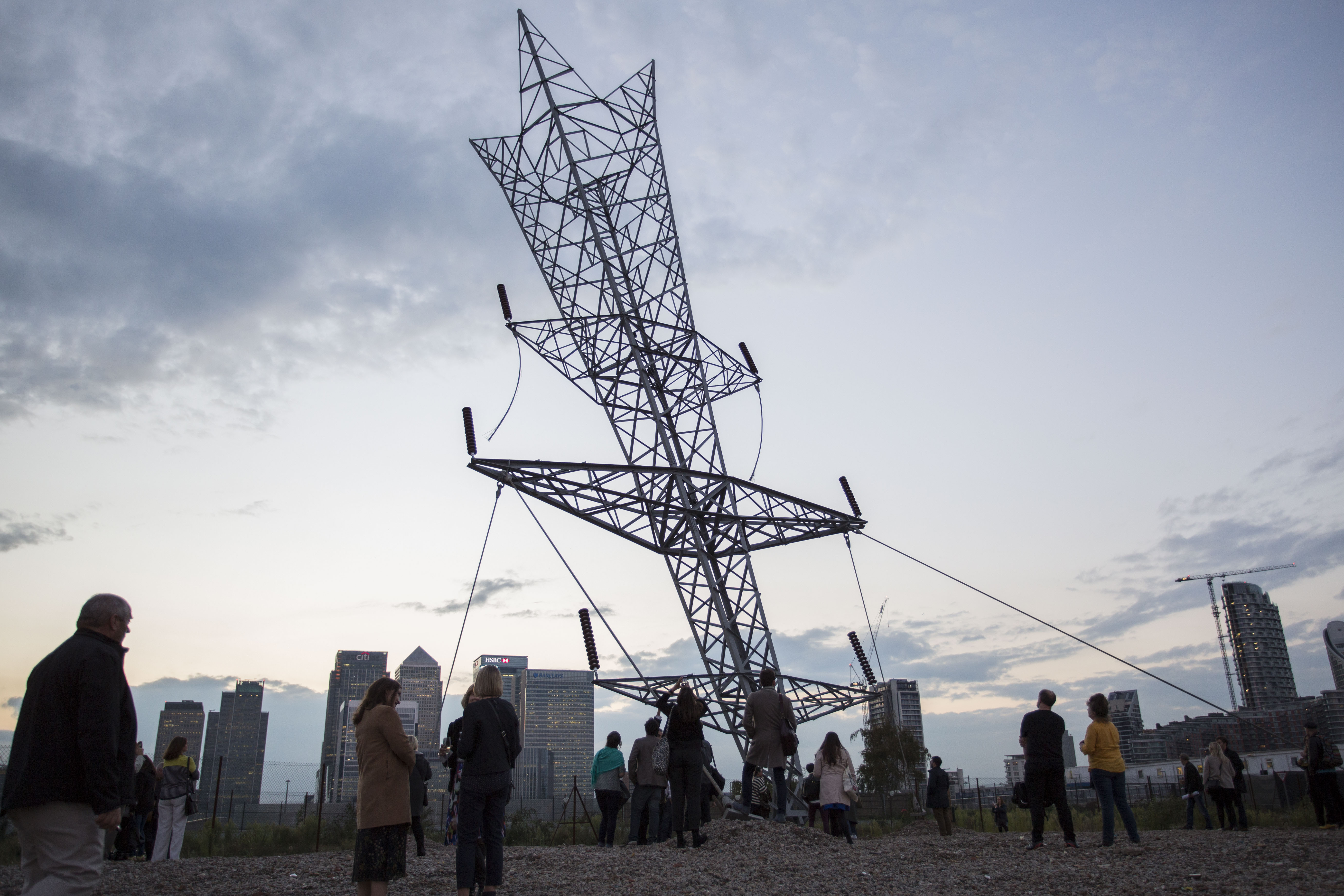 Alex Chinneck’s a Bullet from a Shooting Star

Contextual sensitivity is key to Chinneck’s practice, he says, and A Bullet from a Shooting Star references the industrial landscape of gas and oil works on the site. “Thinking about the pylon, I looked at the visual and material language of the district, and I also looked at the history of the area. I discovered gas works and power generation—this site was home to the largest gas works in Europe. I spent days and days on location and my mind just became this muddle of information and inspiration. Slowly, the idea somehow came out of that.”

The existing gas tower on site informed the visual language of his materiality—lattice steel. “Because it can be structurally designed, you can create a very tall structure quite efficiently.” Chinneck also embraced the Peninsula’s natural attributes. Situated on an empty plot of land besides the Thames, the pylon cuts a striking, imposing figure on the sparse surrounding landscape: “I love how the light cuts across the Peninsula. I thought it would be lovely to create a structure that silhouetted this.”

This type of large-scale public work is not quite what you’d expect from a practitioner who chose to study painting at Chelsea College of Art. But Chinneck soon found himself concerned with other disciplines. “I became interested in sculpture, for one, but also architecture and engineering. My work began to slowly evolve in ambition, scale and complexity. I started to make these public projects that were a hybrid of those creative disciplines, and an amalgam of my different enthusiasms and interests.” 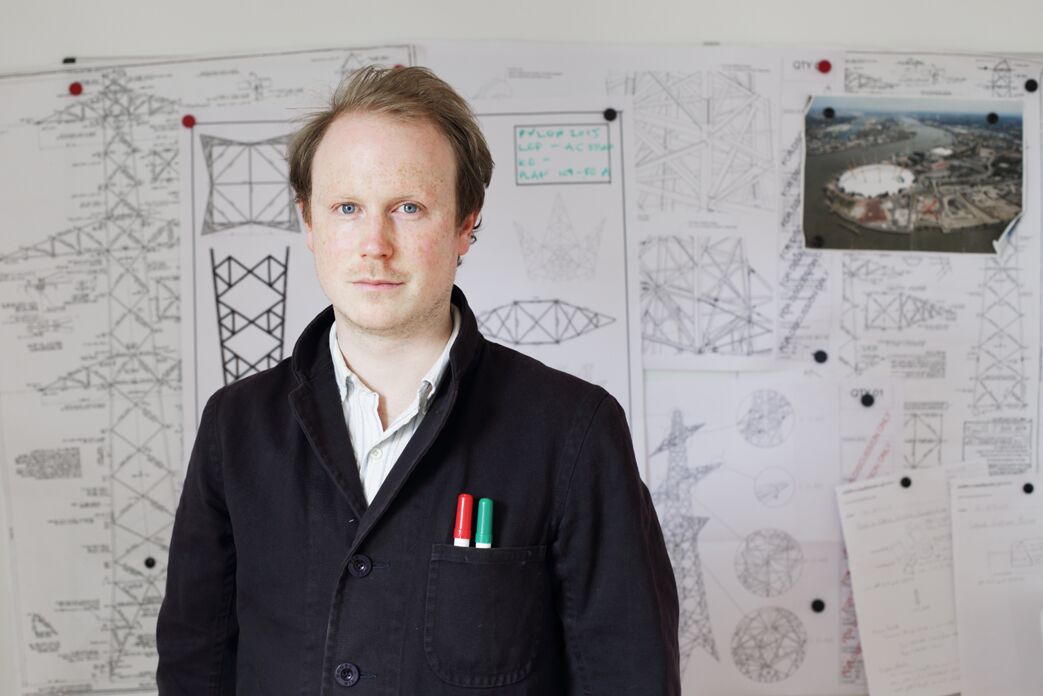 Influenced by the artists Richard Wilson and Rachel Whiteread, he began working outdoors on an architectural scale around three years ago: “Every project since has been this accumulation of that ambition and complexity—the pylon represents the most ambitious and the most complicated project that I’ve ever undertaken.”

His concepts are grounded in surprise; Chinneck’s work subverts the familiar and distorts our perception of the world around us. He has slashed through London’s Covent Garden market, leaving it suspended mid-air; a four-storey town house in Margate appeared to slide out from under itself; while a recent stroll along Blackfriars Road would have uncovered two upside-down facades. It’s part slapstick, part unnerving, part playful, and wholly visually and physically extraordinary—his passion for construction is obvious. “Even though my works are very simple in concept, they’re extraordinarily complicated in execution, management, fabrication and design. What I lose in complexity conceptually I make up for in logistical and technical complexity.” 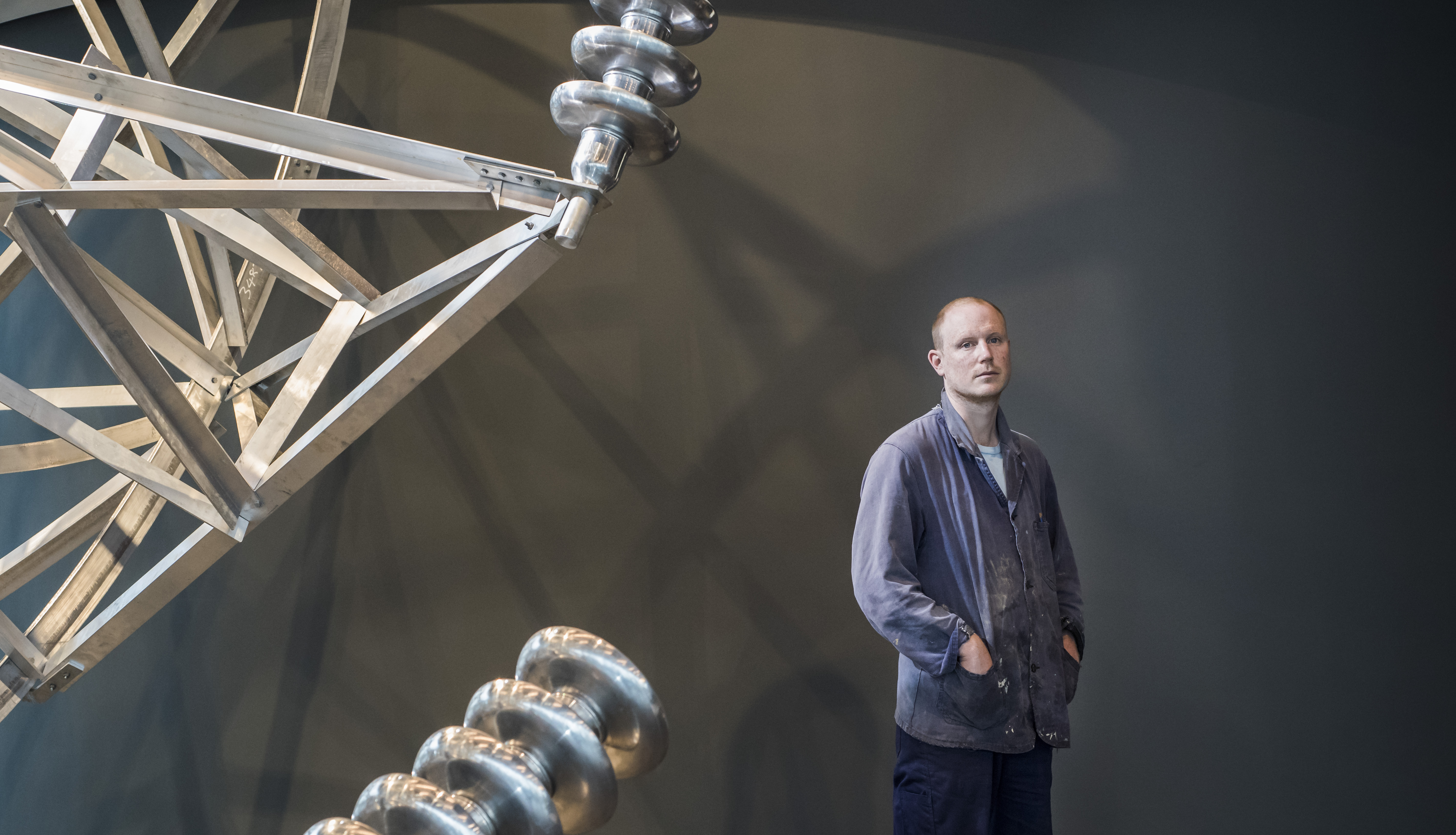 Chinneck intentionally makes work for the public arena, and in doing so, is sincerely concerned with ideas of accessibility: “I try to create experiences that anyone can understand and enjoy. In the public realm, there’s no place for cultural or intellectual elitism—though I don’t actually think there’s a place for that in cultural institutions either. The art world especially is guilty of associating accessibility with ease, or simplicity, and that’s just not the case. It’s not a patronising action—I don’t dumb down my objectives to make it digestible for the public, this is just the work I want to make. I’m interested in theatricality, and I guess my work is a bit of a show-off,” he laughs.

The pylon is programmed to pierce the eastern piazza of the Peninsula for around nine months, and this temporary and transitional nature of Chinneck’s work is significant: “Nothing lasts forever, and nothing should. Impermanence and impact go hand in hand. When you’re conceiving a permanent public artwork, it’s no longer art, it’s design. Your material choices are incredibly fixed because you have considerations such as durability—not just in the material sense, but also conceptual longevity.”

Chinneck, a child of our fast-paced urban culture, recognises that people are, nowadays, easily bored: “Things date, visually and conceptually, and they slip into the territory of fatigue and over-familiarity. Temporary public interventions, for me, are far more exciting. Impermanence is an absolute life-source for ambition, whereas permanence is a cage—you’re just totally limited.” A literal iteration of this is Chinneck’s A pound of flesh for 50p, an unassuming, two-storey house on Southwark Street made from 7,500 paraffin wax bricks, which slowly melted over the course of a month last year: “Its impermanence was entwined with its conceptual origins.” 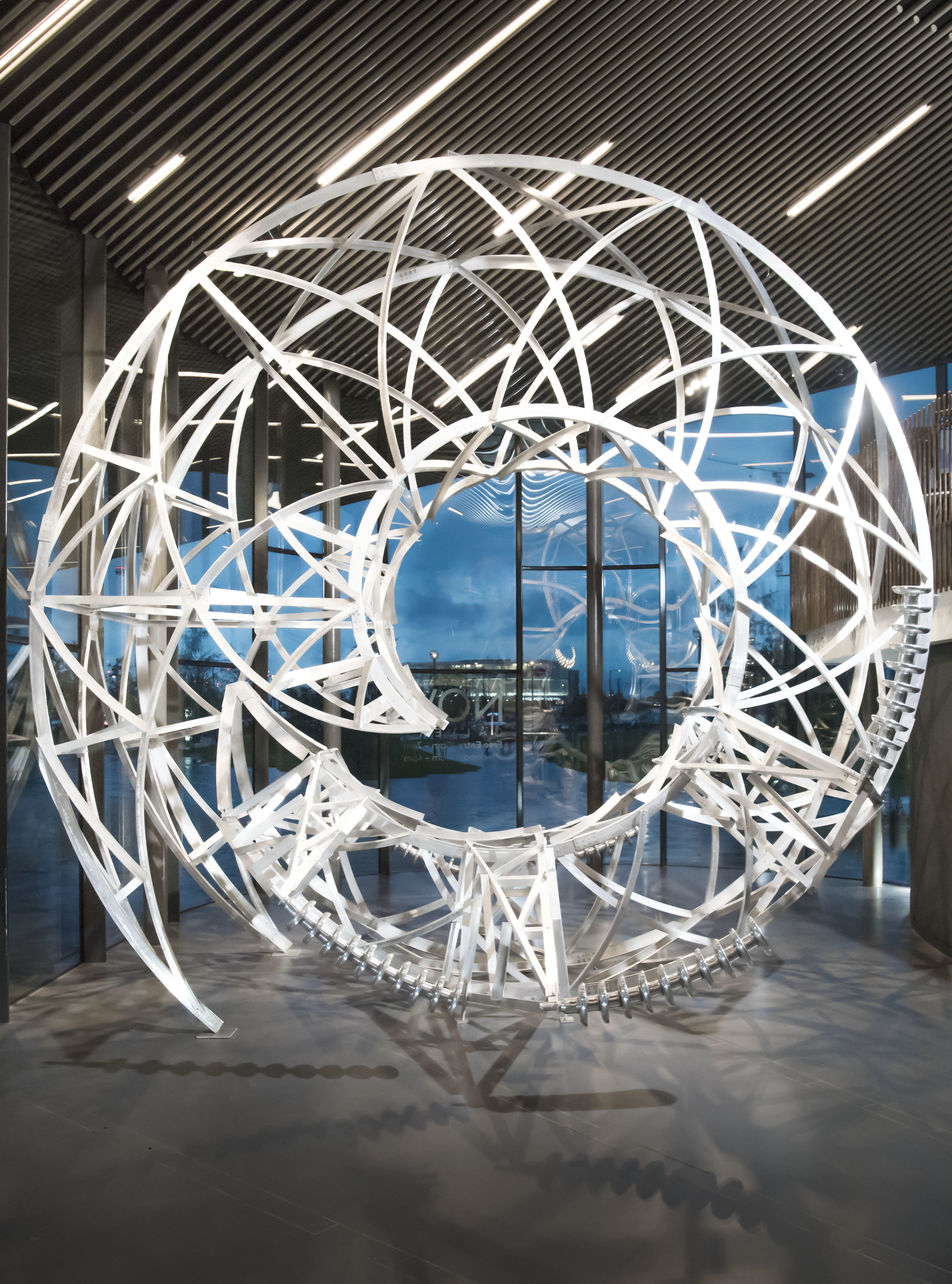 An accompanying show to his pylon work at NOW Gallery sees Chinneck take the same visual scene, but create something that is sculpturally unalike. “We have coiled a pylon. Where one is outstretched and joins the ground and the sky, the other rolls itself in a circle. The two works speak the same cultural language, but they’re also very different.” Though indoors, Chinneck hasn’t shied from scale—within the atrium space of the gallery, the work reaches floor-to-ceiling. For Chinneck, the paired works are about creating a dialogue between their two locales: “I want to explore the different territories in the district, but simultaneously offer something alternate at each setting.”

It’s a happy accident then that Chinneck, who has also worked with Conrad Shawcross, is fascinated with construction and industry, and allows this enthusiasm loose through his artistic practice—his architectural illusions exist to intrigue, astound and amuse: “Artwork doesn’t have to be challenging, it can be pleasurable—sometimes the strongest experiences are the simple ones.”

I grew up in Bedfordshire. I now live and work in London.

My dog Burt, if a dog is a possession.

A cotton drill suit. I have the same suit in two colours, two of each colour. I wear these absolutely every day. It’s a daily decision I don’t have to make.

WHAT ARE YOU READING?